I have a large IVF practice with major interests in different types of IVF treatment including embryo selection through preimplantation genetic diagnosis, recurrent miscarriage and IVF treatment failure management.

I put great emphasis on the identification and correction of the fundamental issues which are causing a specific couple to struggle to conceive either naturally or with assisted reproductive treatments and offer highly individualised management. IVF treatment means “fertilisation outside the body (In Vitro Fertilisation)”. IVF treatment is considered for couple for two major reasons 1) when natural fertilisation was not possible or deficient for either female or male infertility factors or a combination of both; 2) to improve the efficiency of this natural process in ultimately achieving a health pregnancy.

Natural conception requires the meeting of an egg and sperm in the woman’s pelvis which requires a) normal ovulation; b) normal and healthy pelvic anatomy; c) normal sperm; d) timed intercourse.

Any conditions impairing the above will affect natural fertility:

When any of the above factors cannot be sufficiently treated through medical or surgical means, these in most cases can be bypassed by allowing the egg and sperm to meet in a laboratory environments (IVF), with the embryo being returned to the uterus.

In a fertile couple (absence of the above factors) or when the above factors are overcome, the chances of conceiving per month or per attempt of treatment are still limited by nature as shown by monthly conception rates below according to women’s age:

The reasons for the low conception rates even in young fertile couples (best 25% per month) are many of the oocytes women produce and sperm that fertilises the eggs may not be normal (in terms of genetics and energies etc), there are individual variations in such reproductive efficiency (how often a normal egg or sperm is being produced) but in general these worsen with increasing age for both sexes, accelerating rapidly when women reach 35-37, but very gradually and smaller in males into their old age. The main reasons behind these are that all the eggs a woman would ever have are formed well before she’s born, while men are making sperm into old age (separation of the pair of chromosomes are much easier when sperm is newly made, in contrast to eggs in which the pair of chromosomes are formed long before, that they have difficulties in separation at ovulation).

A woman only makes only 1 egg each month, that becomes the main constraint on the chances that a normal egg can be obtained in a single month. The mono-ovulation are results of the control of FSH on follicles at their last stage of maturation – the last few weeks of 4-5 months growth they’ve already be through. FSH needs to be maintained above a threshold for the follicle to mature, and what happens in the early cycle is the biggest follicle among the cohort respond by growing and rapidly putting out a lot of female hormone call oestradiol, which shuts down FSH so the smaller ones in the cohort do have sufficient FSH for them to complete the journey and they died (women normally only ovulate 300 eggs out of 7 million they have through this mechanism). 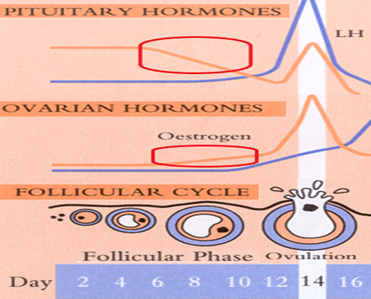 This is how the pill works by shutting down FSH (with oestrogens in pill) so no follicle reaches maturity, but they still die off each month.

If the FSH is prevented from dropping down during the second part of the follicular phase, more follicles will be allowed to mature, and more eggs can be obtained in a single month that allows a high chance that a normal egg can be found. 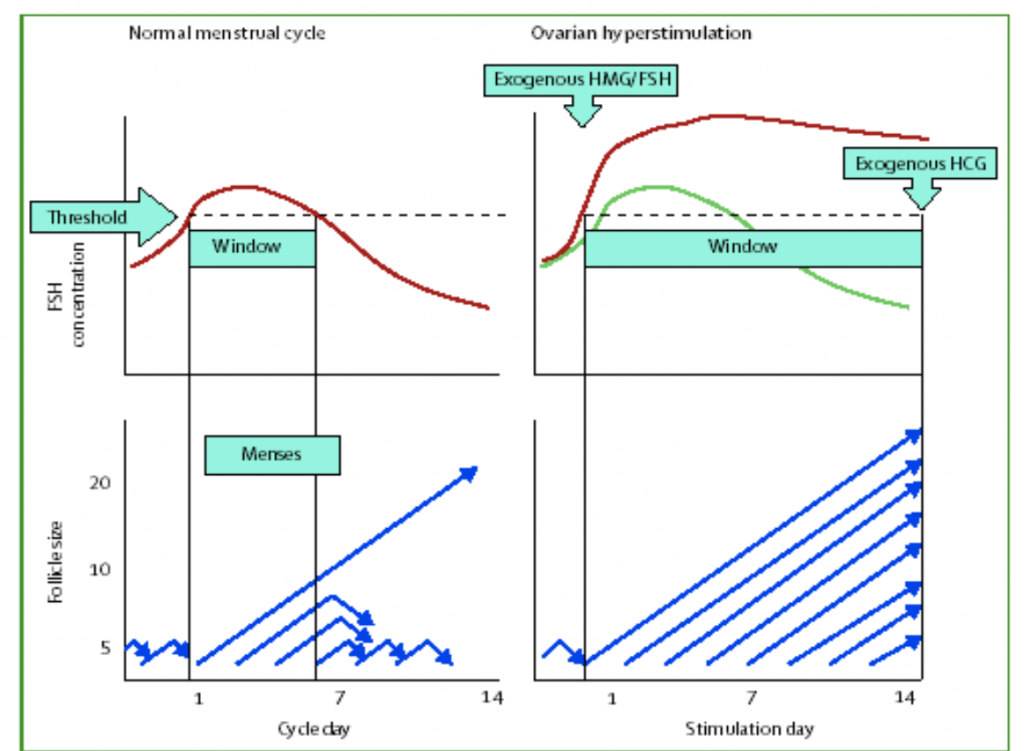 That’s how IVF success rates can exceed above that of nature as shown below: This is the second reason why some couples who are capable of conceiving naturally can be helped by IVF to improve reproductive efficiency. These are considered for couples who

Naturally, some mature follicles may not produce an egg (egg retrieval rates averaging 80%). When eggs are obtained it is likely some will be incompetent (not fully or over mature – from smaller or bigger follicles then optimal) and abnormal ones which may not get fertilised (fertilisation rates average 70-80%), or they stop growing in the laboratory for the 5-6 days (on average only 40-50% of fertilised eggs will reach this stage) before they are ready to be transferred (then further selection occurs naturally through getting pregnant and miscarriage). For some women further selection can take place before the embryo transfer by taking some cells out from the placental part of the embryo and check for genetics (e.g. wrong number of chromosomes such as trisomy 21 Down’s Syndrome, or any know genetic condition such as cystic fibrosis)

It is important to realise IVF is simply a process in improving the efficiency of the egg and sperm meeting in a specific couple, but at the expenses of nature.

At the expenses of nature

The ultimate success will still depend on the couple

If you have a question on enquiry related to IVF, please get in touch and we will get back to you. 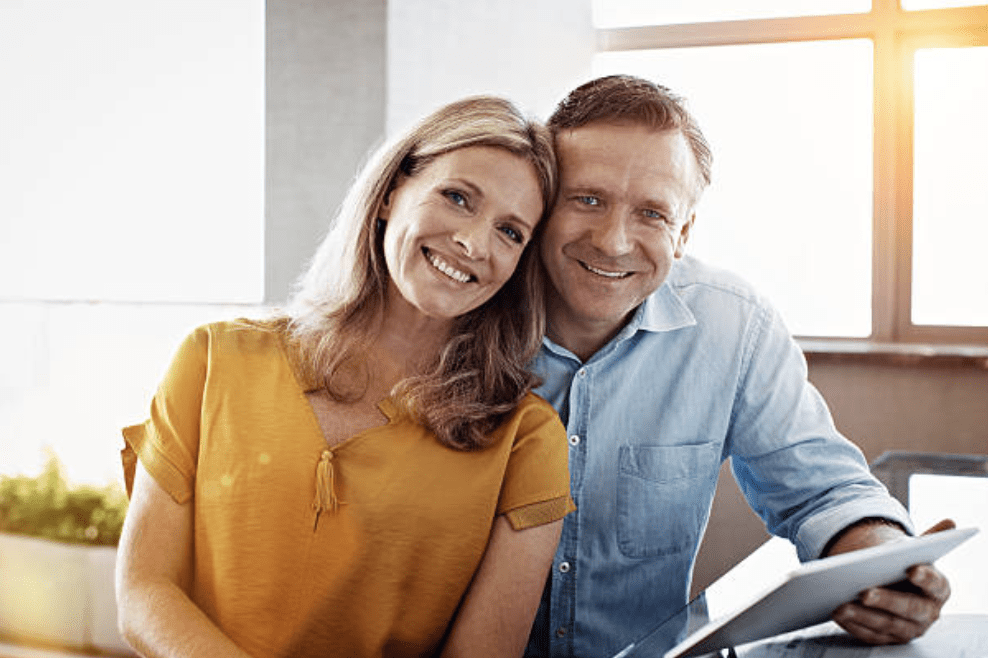